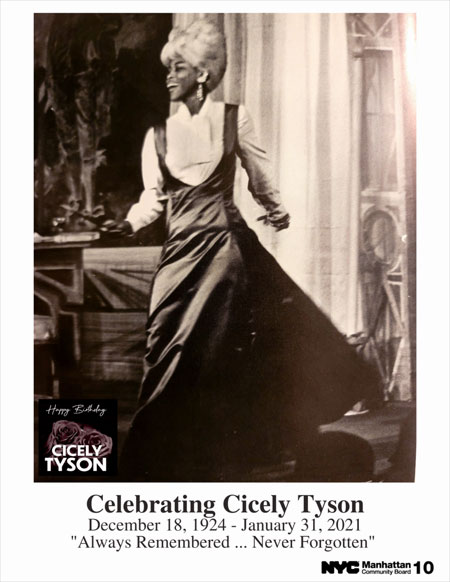 December 19, 2021 is Cicely Louise Tyson’s birthday. She would have been 97 years-old. To commemorate and honor the birth and legacy of this award-winning actor who broke barriers by challenging the stage and screen image for Black people, the Black theater service organizations—Black Theatre Network (BTN), Black Theatre United (BTU), The CRAFT Institute, The International Black Theatre Summit and Project1VOICE (P1V)—along with Broadway Black and The Greater Harlem Chamber of Commerce, are uniting for a national/global day of remembrance and solidarity called Cicely L.Tyson Day.
Ms. Tyson resolved early in her career to bring a positive philosophy to the parts she played, “My art had to both mirror the time and propel them forward,” she wrote in her memoir, Just As I Am, published only weeks before her death, last year. “I was determined to alter the narrative about Black people—to change the way Black women in particular are perceived, by reflecting our dignity.”
Besides her Oscar nomination for best actress in Sounder, she won two Emmys for playing the 110-year-old former slave in the 1974 television drama The Autobiography of Miss Jane Pittman. In 2013, at the age of 88, Tyson won the Tony for best leading actress in a play for the revival of Horton Foote’s The Trip to Bountiful. But she said her most important accomplishment happened in 2016 when President Barack Obama awarded her the Medal of Freedom.
Join us tomorrow December 19, 2021
by observing a moment of silence
for 97 seconds
or
Dim the lights of your organization,
business or home for 97 seconds at 7PM
Staged Readings, Performing Arts Shows, Documentaries & Shorts