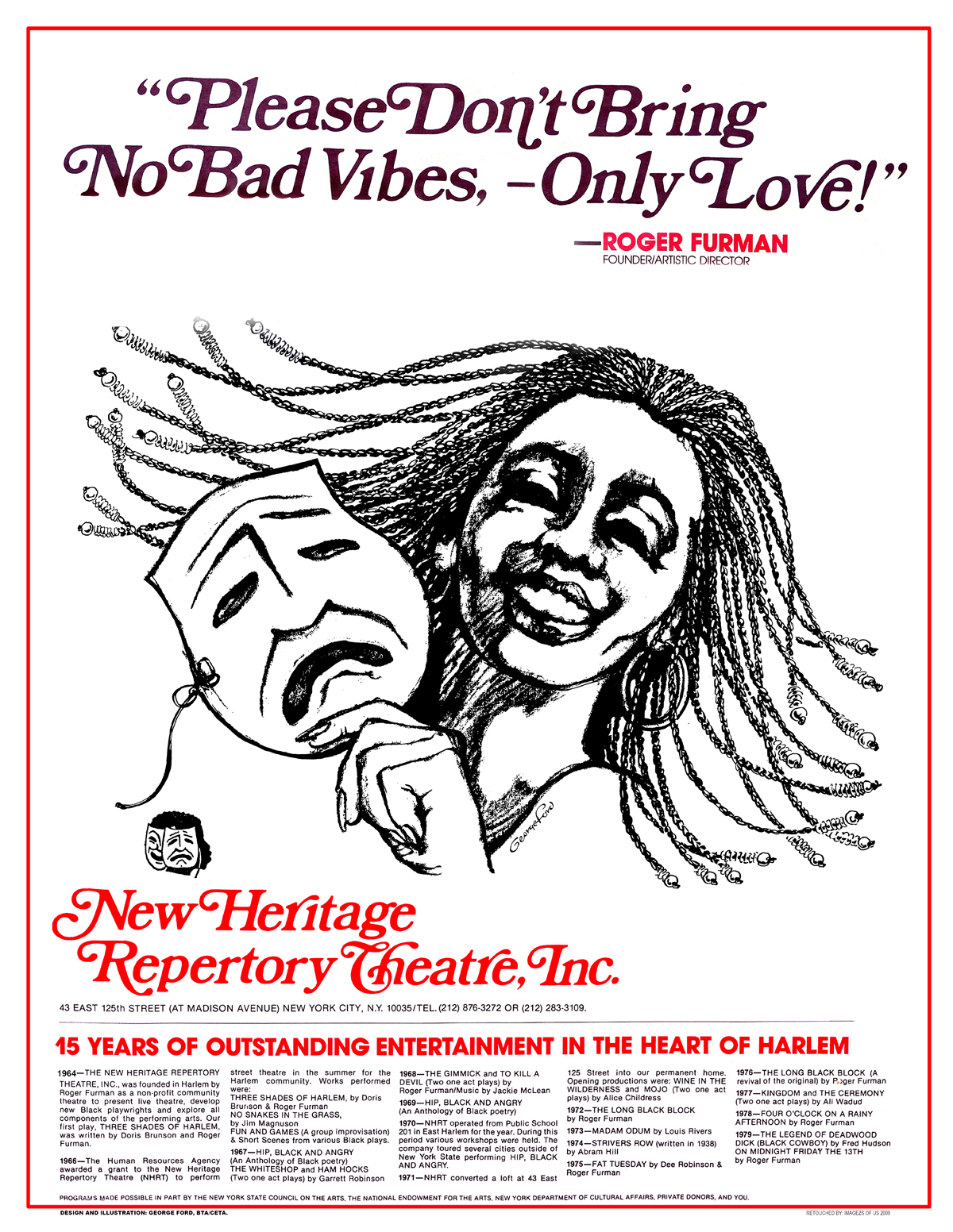 NHTG was established in 1964 as the New Heritage Repertory Theatre (NHRT)
Founded by the late Roger Furman, Playwright, Director, Actor, and Lecturer

Roger Furman was born on March 22, 1924 in New Jersey and studied theatre arts at the Drama Workshop of the New School for Social Research under Erwin Piscator. Furman worked as an apprentice under Rafael Ríos Rey at the National Theatre of Puerto Rico and was a former student at the American Negro Theatre (ANT) with Sidney Poitier, Clarice Taylor, Harry Belafonte, Ruby Dee and Gertrude Jeannette. Furman was the youngest person at the American Negro Theatre commissioned to design a set for Tin Top Valley, starring Fred O'Neil, produced by ANT.

Furman's trademark was imaginative headgear and he believed in Harlem as a fertile theatrical seedbed. In addition to his acting and directing chores Furman taught courses on the History of Black Drama at New York University, Rutgers and Hartford University and a was co-founder of the Black Theater Alliance, an organization of performance groups.

His directing chores include Bertolt Brecht's Three Penny Opera, Wine In the Wilderness(1969) and Mojo: A Black Love Story (1970) by Alice Childress. Furman Wrote and directed the critically acclaimed play The Long Black Block (1972) with music by Jackie McClean and co-authored and directed Fat Tuesday with Dee Robinson.

Additional directing work by Furman includes: the award winning Montezuma's Revenge, Harlem's classic On Strivers Row (1949), A Day of Absent, Hip, Black and Angry (1967), The Gimmick (1968), To Kill a Devil, Man In The Family, Harlem Heyday, Another Shade of Harlem, No Snakes In The Grass, Monsieur Baptiste The Con Man and Fun in Games.

New Heritage Repertory Theatre was awarded a training program grant from Columbia University School of Theatre to teach young Black and Puerto Ricans the technical aspects of theatre. In 1973, Roger Furman was a recipient of the AUDELCO Board of Directors Awards and was nominated for best director in 1975 for Fat Tuesday. His New Heritage Repertory Theatre was honored by Fibonacci Inc. for its contribution to the rich cultural life of the Harlem community.